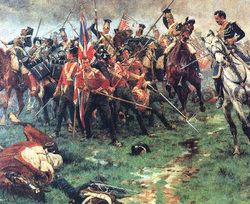 British victory over the French in the Peninsular War. 16th May 1811 at Albuera, a village some 21km southeast of Badajoz, Spain. A French army of about 23,000 troops under Marshall Nicolas Soult was marching to Badajoz, which was under siege by the British, intending to break through the British lines and raise the siege. The duke of Wellington ordered General William Beresford to abandon the siege and turn to meet the approaching enemy. Beresford selected Albuera as a suitable place for the battle and disposed his troops- 6000 British and 24000 Spanish and Portuguese- on a ridge overlooking the village. On the morning of the 16th ,Soult launched a feint attack against the Allied left flank while directing his main force against the Allied right. Beresford had expected a frontal attack and was unable to wheel his troops before the French struck. The Spanish troops on the left were shattered by French musketry and a cavalry charge, and the British 2nd Divison was brought from the other side of the field to stop the attack. The 57th Foot lost 423 of their 575- strong contingent and earned themselves the nickname 'The Diehards'. There was little room to manoeuvre on the ridge, so the battle became a fierce hand to hand affair. Beresford narrowly escaped capture and was preparing to retreat when the British and Portuguese reserves were brought up and, charging up the hill into the face of the French, routed them. The French were able to retire in good order, taking about 500 prisoners with them, but the siege of Badajoz had not been raised. Of the 6000 British troops, only 1500 were not wounded. (Hogg, Ian, Dictionary of Battles. 1997. Brockhampton Press Ltd: London)