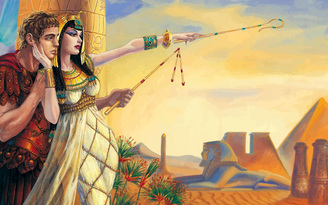 It is easy to forget that we are closer in time to Cleopatra than the builders of the great Pyramid at Giza. The great pyramid was built around 2560 BC while Cleopatra was born in 69 BC as a descendant of Ptolemy, a former general of Alexander the Great. Marc Anthony was born into a privileged Roman family and while his father died fighting pirates his grandfather was a great and skilled orator. This subtle skill was not at the forefront of Anthony's character and he ran up large debts with a lavish and often over the top lifestyle. He enjoyed drinking to excess and participating in the highs of Roman society.

​Cleopatra came from a long line of relatives known as Ptolemy and Cleopatra. Her father was Ptolemy XII Auletes and while her mother is not known she was Cleopatra VII. She was not of Egyptian descent as Ptolemy was a general in the army of Alexander the Great and set up a Hellenistic (Greek) kingdom in Egypt when Alexander died.  She was initially instated as joint ruler with her father and later her brother Ptolemy XIII but the timely intervention of Gauius Julius Caesar paved her way to the Egyptian throne. It is said that she was smuggled into the palace in Alexandria in a linen bag and unveiled to Caesar who immediately took to her flirtatious entrance. A son was conceived during their time together in Alexandria and named Caesarion, cementing the alliance between Rome and Egypt (Egypt acting as a vassal). The fate of her brother, Ptolemy XIII was not dignified as he was drowned in a river after being forced into the camp of those Egyptians opposing Caesar. Cleopatra accompanied Caesar on a pleasure cruise down the river Nile after his victory in Egypt and many back in Rome felt he should of hurried back to Italy.

Anthony in this time has fought a successful campaign with Caesar in Gaul and proved capable in his administrative position assigned to him in Rome by Caesar. He has also seen some military action in Syria and proved a brave and able soldier of the Republic. While brash and wild in his outward manner, Anthony proved to be loyal to Caesar and his cause. Before Caesar was assassinated he was intercepted outside of the senate and was unable to assist his friend from the bloody act carried out by Brutas and other senators that day.