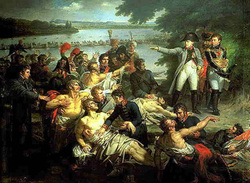 Austrian Victory over French troops 21-22 May 1809; Napoleon Bonapartes first ever defeat. Following the French occupation of Vienna, Archduke Charles gathered the Asutrian Army across the river Danube. Napoloeon sent an opposing force of 40,000 troops to the marchfeld plain, between the villages of Aspern and Essling. A confused battle ensued, after which the Asutrians held Essling and the French Aspern. On the following day Napoleon attacked again and broke the Austrian centre, but the Austrians held firm and sent a force to destroy the bridges behind the French. Napoleon ordered the attack to cease and the French then fell back, fighting a rearguard action, to the village of Lobau.  (Hogg, Ian, Dictionary of Battles. 1997. Brockhampton Press Ltd: London)