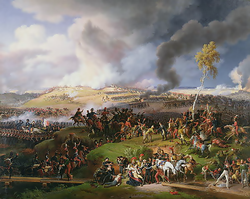 A Battle between French and Russian forces 7 Sept 1812 during Napoleon Bonaparte's invasion of Russia, one of the bloodiest battles of the Napoleonic years. Napoleon, with 137,000 troops and 585 guns, had advanced as far as Borodino, on the river Kolac, about 110km west of Moscow where a Russian force of about 110,000 had taken up a strong position behind temporary fortifications. After a powerful artillery bombardment the French attacked and captured some Russian field works, which were promptly recaptured. The battle moved back and forth indecisively for some hours before Napoleon mounted a major assault with artillery and cavalry which made considerable inroads into the Russian lines. The Russians counterattacked repeatedly until late afternoon when, exhausted, they fell back to a ridge behind their original position; the French, equally exhausted, also fell back to their starting point. The Russians lost 15000 dead and 25,000 wounded; the French lost about 28000, including 12 generals. Although the Russians were still a coherent force, they were in no condition to fight another battle and Napoleon was able to continue his advance on Moscow. (Hogg, Ian, Dictionary of Battles. 1997. Brockhampton Press Ltd: London)