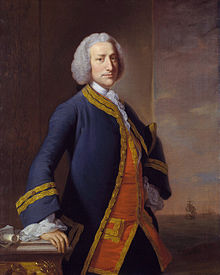 George Anson was born on the 23rd of April 1697 to William Anson and Isabella Carrier. George Anson's mother was the sister in law of Thomas Parker, the 1st Earl of Maccasfeild who was the Lord Chancellor until 1725 when he was impeached for bribery and placed in the Tower of London. Anson joined the Royal Navy as a volunteer at the age of 15 due to a yearning for adventure on the high seas and a dissatisfaction with his environment at home. Initially he served on HMS Ruby and HMS Monmouth before becoming midshipman on HMS Hampshire in 1716 while serving in the Baltic. He enjoyed quick progression through the ranks becoming lieutenant of HMS Montagu in 1718 and advancing to the position of commander of HMS Weasel in 1722. During in this time HMS Weasel was involved in limited action against Dutch smugglers. Upon being made Post-Captain in 1724, Anson saw active duty as captain of the ships HMS Scarborough and HMS Squirrel. The Squirrel patrolled the coast of Carolina until it was paid off in 1735,as a result Anson was unemployed for two and a half years before becoming captain of the 60 gun ship  HMS Centurion in 1737.
The War of Jenkins Ear

The War of Jenkins Ear broke out between Great Britain and Spain in 1739, the war was named after Robert Jenkins who had exhibited his severed ear to parliament in 1738 following his vessel being boarded by the Spanish in 1731. However this act alone was not soley responsible for a declaration of war, a number of contributing incidents and tensions led to the eventual outbreak of hostilities between Great Britain and Spain. Tensions were high surrounding the expansion of British colonial interests and the steady decline of the Spanish Empire and its wealth. In particular the West Indies had become a rich trading ground and Britain wanted access to the lucrative trade network the the Spanish operated in the area. Britain had only a small legal right stemming from the Treaty of Utrecht (1713) to legally trade in the vicinity, the Spanish in turn feared the British threat to their monopoly on trade. The Spanish attempts to enforce the asiento provision of the treaty led to the boarding of Robert Jenkins ship, the loss of his ear and the eventual conflict that became the War of Jenkins Ear. This war eventually fell under the larger umbrella conflict known as the War of Austrian Succession which broke out in 1740.
Voyage Around The World

In 1740 George Anson was tasked with plundering Spanish possesions in the Pacific, disrupting trade and capturing key strategic locations after Britain's declaration of war in October 1739. The expedition was poorly planned and funded, Anson struggled to secure enough able bodied seamen to adequately fill the seven ships he had been tasked to command. Many of the men he eventually secured were sick or of an age that they were to prove of little help to his expedition.
Capturing the Manila Treasure Galleon 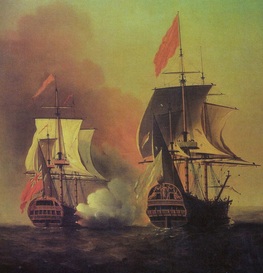 Anson returned to Spithead on the 15th of June 1744 with over £500,000 of treasure he had captured from the Manila Galleon.
The Battle of Cape Finisterre: Defeating the French
Seven Years War